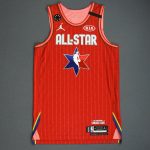 It was more than a month ago when the National Basketball Association (NBA) and its players association announced the new collective bargaining agreement that will begin with the 2020-21 season. The most notable change to the sport is the elimination of jersey sponsorships. While jerseys with corporate logos have been prevalent in other leagues for years, this will be the first time in NBA history that teams will take to the court without any branding on their uniforms. This is a big deal for a few different reasons.

When it comes to the NBA, there’s no such thing as a small market team. Every city in the United States—and then some—has at least one squad fighting for a chance at the Larry O’Brien Trophy. And with the rise in popularity of the sport, that number is only going to continue to grow. As we head into the 2020-21 season, all of the teams in the Association will have new uniforms. We’ve seen leaks and hearsay about what some of the designs might entail, but nothing has been confirmed until now. The NBA has released images of all of the jerseys that will be worn next season, and they are absolutely stunning. Without further ado, let’s take a look at every team’s new threads for the upcoming season.